This blog documents my studio build started back in 2009. I'm keeping this live for reference as it may help others who are thinking of taking on such a project.

I took delivery of 3 sheets of MDF and a couple of sheets of plasterboard on Tuesday to make a start on the second door (outer).  I had a lot of work to do around the garden this weekend so I set myself a meagre studio build target of getting the main 3 layers of the door cut to size ready for laminating. As before, I used 2 complete sheets for the outer surfaces and the off-cuts for the inner layer which makes maximum use of material and leaves me with another complete sheet for the sealing panel (see inner door.)

In fact, before making a start on the MDF panels for the second door I cut the plasterboard insert (final layer) for the inner door. This was pretty straight forward though I had to be extremely careful as the plasterboard is quite easily damaged especially at the edges. I wanted make a clean job of it because I don't intend to fill or paint it. It was basically a rectangle with a small cut-out around the latch.

OK, another job done and I might even try and get the panels sanded and prepared ready for laminating them at the weekend. 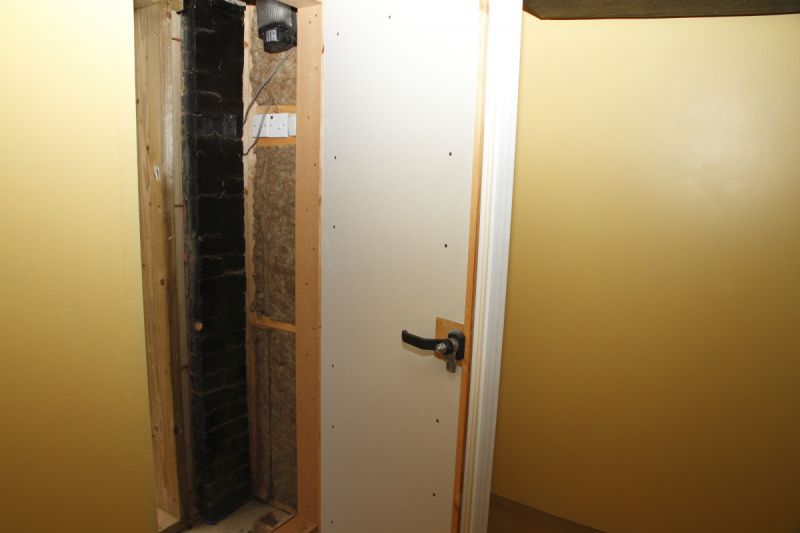 Just a brief entry today. I was hoping to get the MDF for the outer door delivered for this weekend (long bank holiday) but unfortunately I left it too late when calling Travis Perkins as all of their delivery slots were taken up before the weekend and the earliest would be on Tuesday :-(  Probably not a bad thing as there are plenty of other jobs to do as well as planning the door construction.

So the job for today: cover the ceiling cloud with the garden fabric. Wasn't sure how easy this would be but it actually worked out quite well. I needed a piece 275 x 200 cm to cover the entire area so I cut the 275cm length from the 200cm wide roll. I attached one side roughly in position using duct tape and then started stapling the other side using the staple gun. Once I had a few staples in place I removed the tape from the other side and replaced with staples. It was then just a matter of tensioning the fabric and stapling into the cloud framework.

All-in-all a pretty successful job and nice to actually cover the mineral wool to stop any fibres from falling. All that's needed for the room treatments now is to attach some strips to the framework to conceal the staples. For a later date. 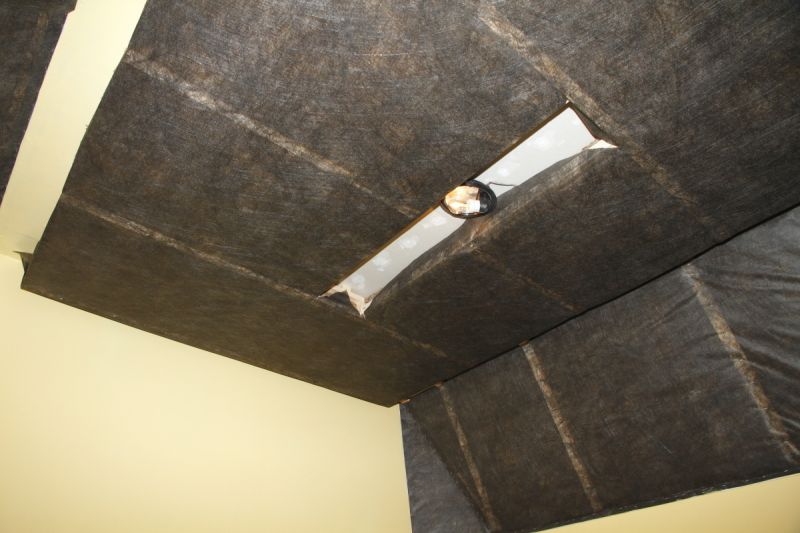 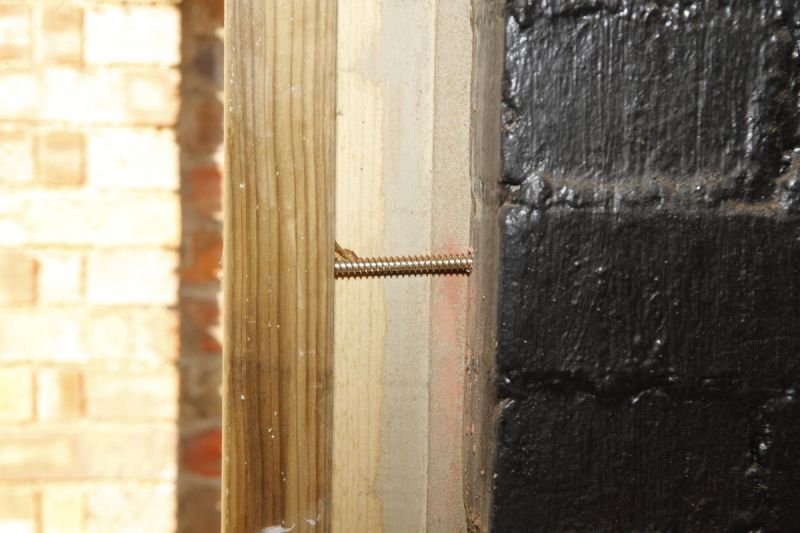 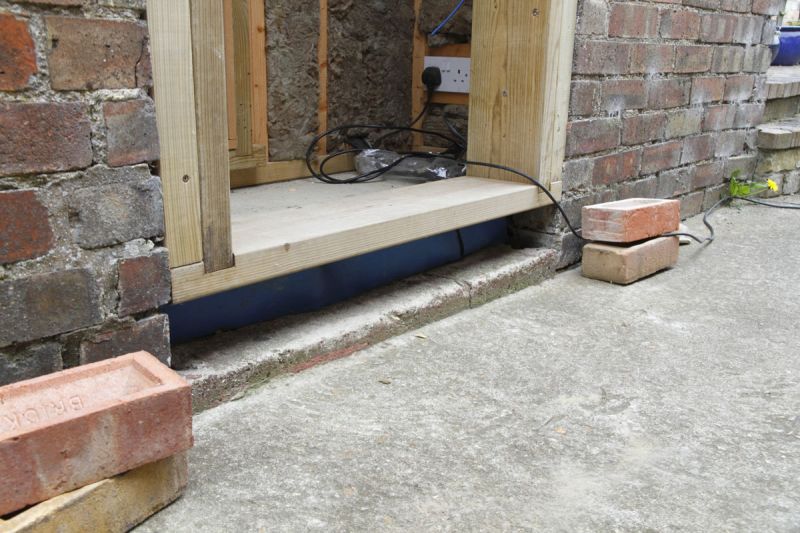 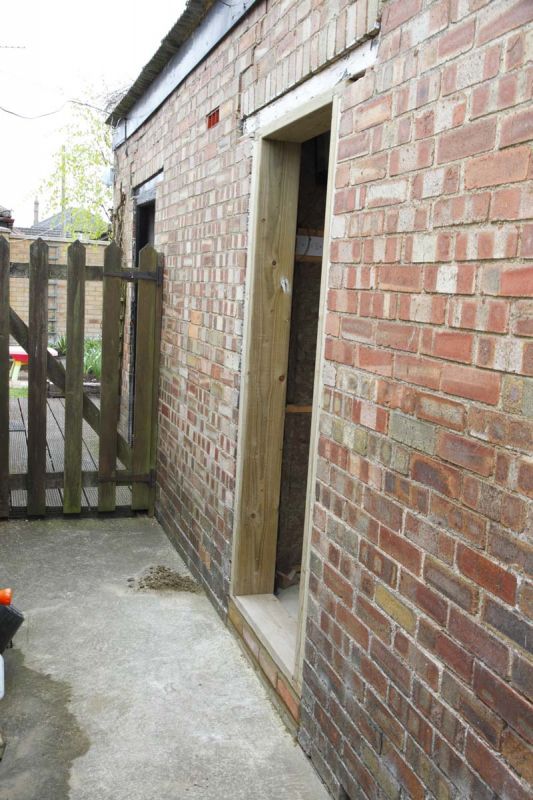 I couldn't put it off any longer... The garage was getting in a total mess and was in serious need of a tidy.  Frustrating but I've always felt better after getting things in order and it allows you to think about the coming jobs.  A couple of hours spent tidying still left me some time to start preparing the outer door frame.

Although before the clear up I did have to pop to the builders merchants to pick up a couple of bags of builders sand. I have to brick up the gap underneath the outer door frame so need the sand to mix some mortar.

Although I had secured the door frame reasonably well to the brickwork it still needed some further frame screws attached.  I've used pretty much the same screws as uPVC window/door fitters use.  They are designed to drive directly into brick/masonry and effectively cut their own thread into a 6mm diameter pilot hole.  I may well have mentioned them way back when I first attached the outer door frame - they are 150mm long and I bought some suitably long masonry drills as I simply drill through with the frame in situ. I may need some more but I used the last four I had for the time being securing near the upper and lower hinge positions.

I also removed an old timber from the original wooden lintel and cleaned away the dust and loose mortar from around the opening.

That's about it I'l next need make some timber packing around the door frame to fill the gaps on the outer edge and then I'll be ready to make and fit the outer door.