Another long pause between posts - another year passes.

I've been considering picking up some kind of MIDI controller device to integrate with Cubase. Having looked at various options over the years, including DAW mixer control boxes and full keyboard controllers from a number of manufacturers. I had in mind the Akai MPK261 for some time and liked the overall appearance of it though I wasn't entirely convinced by its integration with Cubase.  I had also been looking at the Presonus faderport with a single motorized fader which looked to work pretty well with Cubase but of course this only provided transport and a few other functions along with the automated fader movement.

I then got to thinking that wouldn't it be great if there was a keyboard controller with a single motorized fader and transport, reducing the footprint of separate  keyboard controller and transport. I did a search and the Nektar Panorama P4/P6 came up. This has exactly that and although I had seen them around I wasn't entirely convinced by the look of them so I didn't dig any deeper.

It immediately became clear that the P6 controller has some fairly detailed Cubase support. I have since spent some time reading feedback on the web via reviews and user experience with the P6. As always there's negative reports on some aspects of the device but on the whole it seems like a great choice with perhaps a little patience with the setup and adapting to the workflow. Andertons delivered one from stock today so we'll see how it goes over the weekend. I'll post a report.

As I have finally put together the hardware setup I thought I would post an additional item to talk about the setup of the front end of the studio i.e. the input/output hardware. The Apollo Twin USB and its associated console software are the hub of the setup and with the addition of the Focusrite OctoPre 8 channel preamp maximise its IO capability. With two Unison ( >>more info<< )  capable inputs on board for use with instruments or microphones and 8 mic/line inputs via the OctoPre ADAT link. There are also ample stereo outputs: monitor, line out & headphone connectors. The monitor outs connect to the Adam A7X studio monitors, the Line outs 3/4 connect to the Behringer HA4600 4 channel headphone amplifier. Of course with the addition of the UAD-2 Satellite Octo I have a lot more DSP available for tracking with effects too, further enhancing the recording capability.

Below are the items used in this setup: 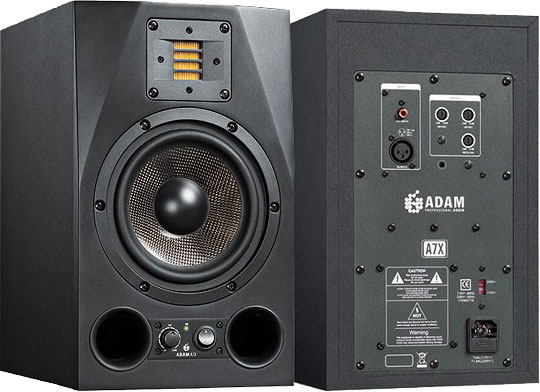 To expand the processing power available for my growing collection of Universal Audio plugins, the UAD-2 Satellite Octo is a welcome addition. The unit itself has very little in terms of connections, simply a power connector and a USB3 port. It essentially adds an addition 8 SHARC DSP processors available for my DAW, increasing the total number to 10 including the 2 inside the Apollo Twin USB. Connection and installation was very straight forward as my UAD-2 install already had the drivers ready for the unit to be connected. I just had to go through the very simple registration process online for the Octo to be available under the UA Console application.

With both the Apollo and the Satellite units being external devices I will be able to easily use them with any other system I might want to run my UA plugins on. I might well purchase a laptop at a later stage and this will be flexible for use in other locations.

I had actually decided to hold off purchasing this as there had been a significant price increase over the last few weeks. I suspect this was as a result of recent exchange rate changes against the dollar. However, this had dropped a little, though not down to the previous level. I contemplated doing something in the new year. Early in January UA added a promotion on the expanders giving a substantial reduction below even the lowest price. It was an opportunity not to be missed. Andertons had one in stock and I ordered on a Sunday and to my surprise it was actually dispatched that day and arrived the following day (Monday) - now that's a first for me!

I've been looking at adding a solid body hum-bucking guitar to my list for some time and when Yamaha released their new Revstar range of guitars last year I immediately liked the look of it. It's not often that a new shape of guitar comes along and offers something original and yet has lasting appeal, which I believe this does.  I've never been a fan of the Les Paul and other similar setups though I have considered a PRS many times but never took it any further.

I demoed an RS620 in my local store a few months ago and I was suitably impressed with it both from a visual perspective and for its playability. Though I didn't do anything at the time I knew this was an ideal choice it was just a matter of when. Anyway, during the recent Black Friday deals I spotted a deal on the bottom of the range RS320 online and decided to take the plunge. For me this offered the best value for money and having heard decent reports about these low spec guitars I could forgo the bling and the fancy finishes of the higher range versions. All I needed was a guitar that played and sounded good.

The guitar arrived the following  day and upon opening the box I was suitably impressed with the look and finish.  I then spent a bit of time playing it acoustically and on the whole it was great to play. However, there was an issue with buzz around the 10/11 frets. I raised the bridge a little bit which alleviated this slightly though it was still an issue and I like a low action anyway.  Over the next couple of days I spent some time with it playing it through my UAD guitar plugs in the studio and loved the sound. I left it a couple of days and then set about checking for any fret issues around the area of the offending frets and indeed the 11th fret was slightly proud of the 10th/12th. I went to the workshop and selected a couple of small files, some glass paper and masking tape.  I masked either side of the 11th fret and carefully filed it down until level with the frets either side.  I re-tuned it and checked out the action - much better actually but still a clear buzz mainly on the D string. Upon further inspection I found a raised area on the 10th fret only around the A D string position. I repeated the filing around the offending area and re-tuned again. Bingo! There's still a very tiny amount of buzz but I'll sort this another time.

Now the action is pretty much sorted I spent more time with the guitar amped up and I have to say I'm very impressed with the thing. I was even able to take the action down close to my preferred height with little or no affect on the buzz issue. I'm looking forward to tracking with my new toy in the weeks ahead!

I've mentioned before that it was my intention to move from my old legacy UAD1 DSP card to the newer UAD2 at some point. The UAD Apollo USB seemed to be the right choice here and with its eventual release it seemed to be the right time to go ahead. The other benefit with the Apollo devices is that they are also audio interfaces in their own right, so in my case it will replace my Focusrite Pro DSP on my latest DAW. I might sell the Pro DSP but I'm not sure just yet - we'll see. I ordered my unit from DV247 on Tuesday 8th March and was pleased to find out that the delivery was made the following morning - all the way from Germany.

Prior to this I had to sort out the cabling in the studio as I did not have a USB 3.0 cable fed from the DAW (outside the studio) to the studio itself. This always posed a problem because the cable lengths need to be in the region of 5m to feed under the wall and below the laminate flooring. I was concerned that a cable of such length would cause issues with the Apollo so I contacted UA support a couple of weeks back and was assured that this should work. Good news - or so it seemed. After actually ordering the device I started reading the extensive information regarding the system requirements and specification and noticed that USB 3.0 cables should be no longer than 2m...what! Okay, having just ordered the Apollo I was a little put out as you can imagine. I have so far not taken this up with the UA support contact but I intend to follow this up once I have tried the unit out with my setup.

I read a little more about the USB 3.0 specification and although they do not give a maximum cable length it appears that a longer cable could affect performance. It was suggested in such situations that an active repeater cable could be used to overcome such issues. So before going home that evening I bought a 3m USB 3.0 repeater in Maplins near to where I work. The intention was to test first the basic 5m cable then compare with the repeater in place along with the 2m USB 3.0 cable supplied with the Apollo.  Having un-boxed the Apollo I was very impressed with the general quality of the device, it really feels solid and well made which I would expect from UA.

The moment of truth. Things went pretty straight forward with the installation of the software and drivers and fairly soon the device appeared and was connected without any issues. The Apollo firmware got updated as expected and everything down to the authorisation of the plugins included with the Apollo to the processing of order for my free Helios Type 69 EQ plugin.

This was all completed with the Apollo connected to the 5m USB 3.0 cable - positive! Over the following days I tested out various aspects of the interface and I have to say that this is a fantastic piece of gear and I'm looking forward to getting into some recording with it. As a note, because I already owned one of the plugins that were included in the bundle I was issued with a coupon to the equivalent value (£149) to spend on my choice of plugs from the store. After a bit of reading I decided to buy the API Vision channel strip using vouchers that I had been issued in the store - so this cost me nothing too!

Okay, so back to the issue of the cable length. Over the coming weekend I intend to compare the performance using the active 3m repeater against the standard 5m cable and further by connecting the device directly using the supplied 2m cable. This should be interesting and will determine how I proceed. However, so far, in terms of the features and usability  of the Apollo I cannot fault it and this means I'm finally moved over to the UAD2 64bit platform and I do not rely on the UAD1 (32bit) plugs being bridged within Cubase Pro 64bit and Mixbus 3.1.

Also, during the brief time I've had with the Apollo USB so far I have to say that the sound is far better than I had imagined and using the supplied pre-amp emulations on the Unison inputs is going to improve the recording quality no end. I also had this configured to utilise the inputs from my Focusrite OctoPre MKII with absolutely no issues!

You can read about the Apollo USB here:
http://www.uaudio.com/interfaces/apollo-twin-usb.html