Just a couple of hours today to give the walls another (final coat?) of paint - with the help of my 4yr old son, who relished the opportunity to contribute to the studio. He largely kept the paint to the walls.

Might give it another coat - I'll see in a week or so. Now off on our Easter break to North Devon...

Not too much done apart from giving the walls another couple of coats of paint.

I started with a proper coat of the white over the mist coat on Saturday. However, on Sunday I had to make a decision regarding the final colour - do I carry on with white or go for something different.  One thing I didn't want to do was pay for paint, so I checked out the selection of old pots available in my garage. I might add that the choice is fairly limited, consisting of a number of off-white shades of yellow. The first pot I opened was a little lumpy so I put that back on the shelf. Next one was fairly mid range and looked pretty good.

So I made a start and though I wasn't sure at first it seemed to work quite well against the black of the fabric covered traps. Don't forget there'll be absorbers on the walls as well so there amount you see will be minimal and toned down with the low light I intend for the room. I got one coat done and it'll need another to cover properly but at least that's a decision made and I can move onto another job.

Not sure what to do next but before I can really crack on with the final stages I need to get the outer door frame made good and get the outer door constructed so that I can make the room secure. I think I'll have to wait until the weather picks up as it seems that winter has set in again in the UK. We are away on holiday for week over Easter so hopefully I'll be raring to go for the final push when I get home. 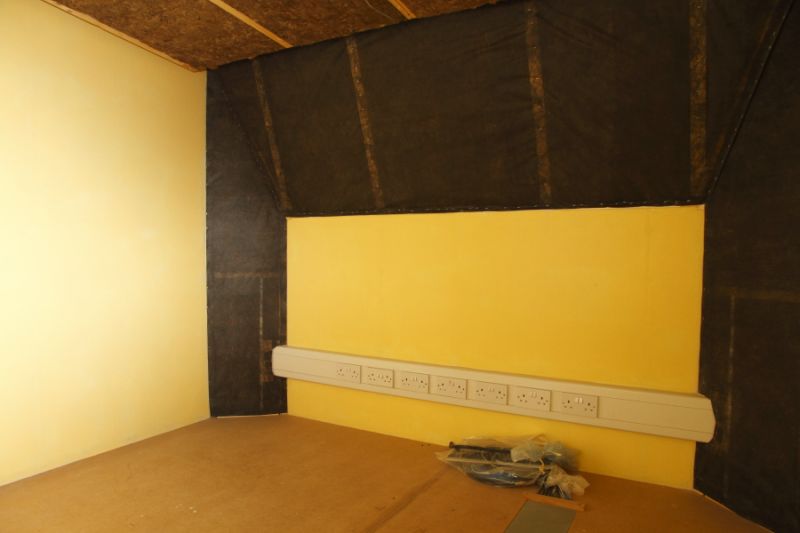 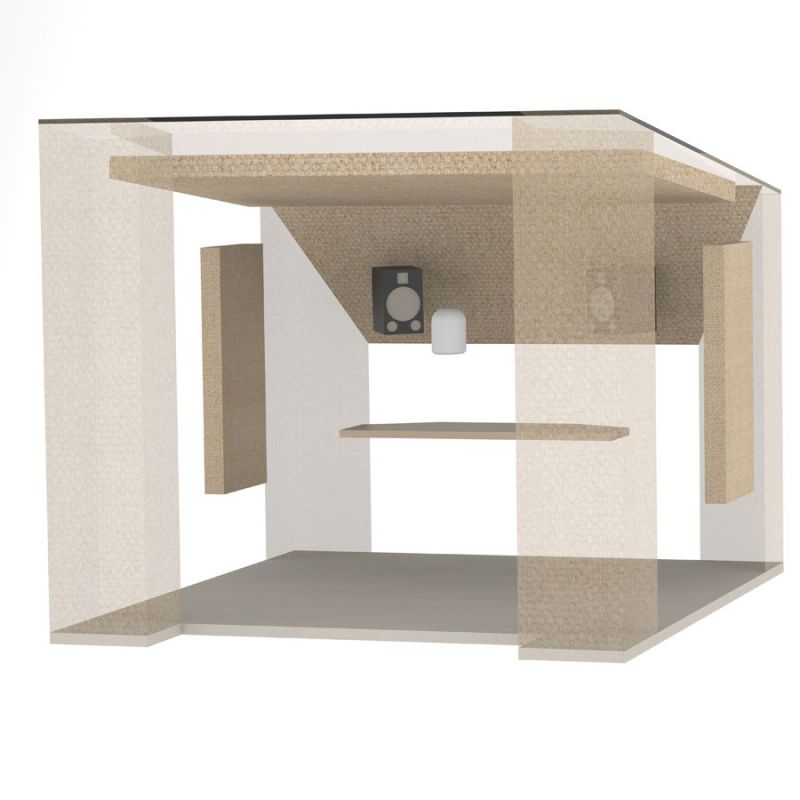 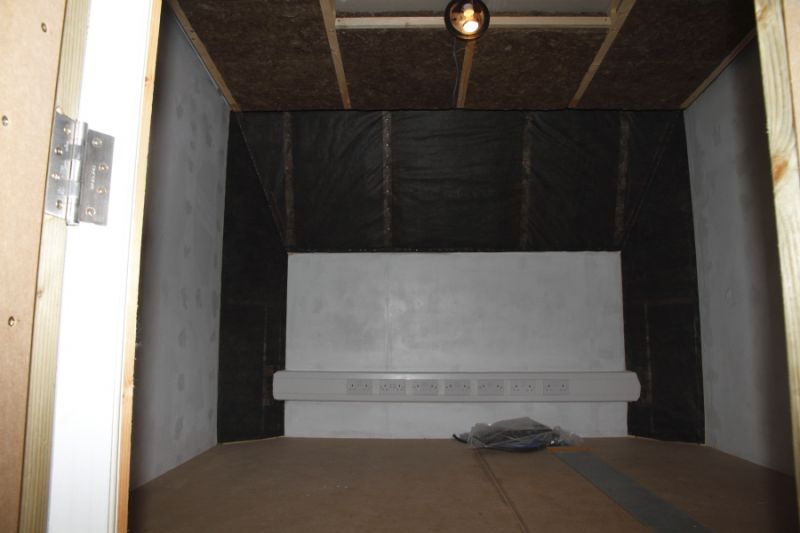 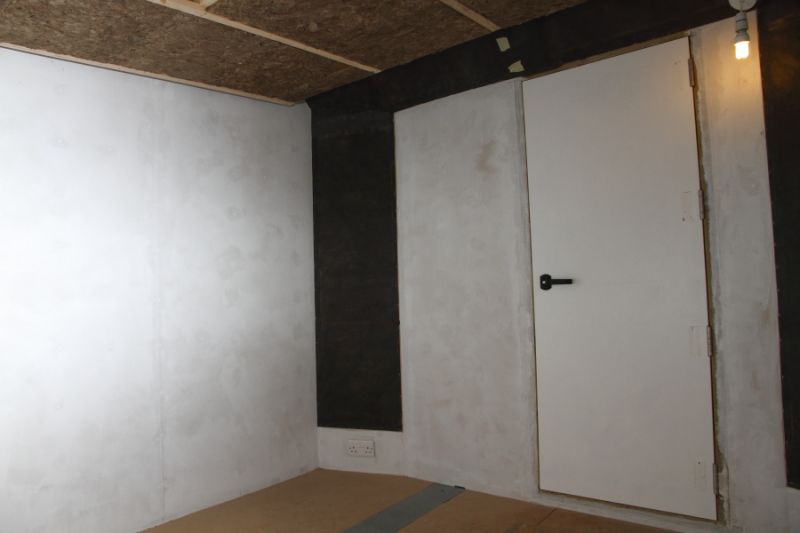 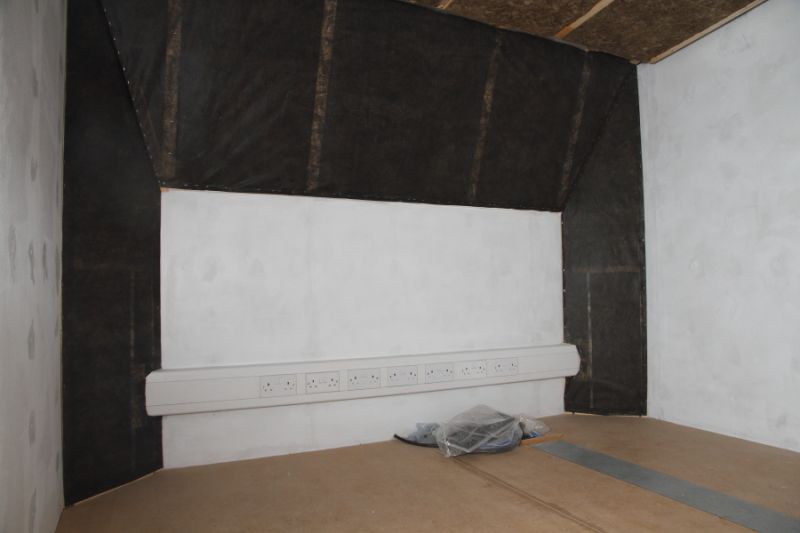 A short midweek entry to the blog...

After a bit of thought regarding the ceiling treatment (cloud) I decided to make a slight adjustment. Most ceiling clouds are hung and have an air gap above, however, my  framing arrangement doesn't allow for any air gap. Another important consideration is that my room is not only very small but the ceiling is also very low so I don't have a great deal of hight to play with. The ceiling, however, is sloped higher towards the back of the room which gives me a bit to play with in that direction.

OK, so the plan was to angle the ceiling treatment frame down thus reducing the angle of the slope giving me an air gap of about 50mm towards the back of the room. This is pretty well the maximum I can drop the cloud because otherwise the door would hit the ceiling cloud. So last night I took down the entire framework and cut some spacer blocks of varying height re-screwed all of the battens into position. I'll just need to do a bit more work this evening to get the job back on track for the weekend.

I've no idea whether this improves the acoustics in the room but I don't think it will be detrimental. I won't really know how good/bad the room performs until I conduct some measurements, which I'll soon be in a position to  do. In fact with this in mind I've just ordered a Behringer ECM8000 measurement microphone in readiness.