A little frustrated not getting the door hung over the weekend I decided to get the thing up this evening after the kids bedtime stories etc.

Before hanging the door I had one job to do while it was on the bench. Although I glued the three layers together with PVA I wanted to be doubly sure that the layers would stay together so inserted a number of 50mm long screws over the back surface that will be concealed by the other panels. Pretty straight forward though the noise whilst screwing into the door assembly was like the loudest squealing I had ever heard.  In fact it was so piercing that I had to wear the ear defenders!

Fitting this door is no easy task when it weighs in at approx 45kg - it's hard enough to lift let alone hang on the frame - though I had already done it for the inner door. Anyway, I followed the process as I had done for the first door and taped a piece of wood to the underside to protect it from bashing whilst moving it from the workshop to the studio. It's inevitable damage will occur even when placing the door on the ground, so this is essential.  The door frame itself is about 12cm above the ground level so I first had to build a level platform at roughly the right height for it to sit on. This took a little work with wedges and a few different pieces of timber to make the correct height. As you already know, the hinge rebates are already in the frame and the hinges are attached to the door, so all I need to do is get the door in position to drill and insert screws.  It's a bit of a juggling act but I managed to carefully get the top hinge in position and drill pilot holes and finally get the screws driven in. A big relief once the first hinge is secured but the jobs not over yet and with a bit more juggling easing the other hinges into their respective rebates I got the lower hinge secured. One of the inner rebates needed a small amount taken off to get the hinge in-situ and screwed on but this was a breeze.

Of course the moment of truth - as always - does it close! I removed the blocks from underneath and removed the length of timber taped to the lower edge of the door and, 'hey presto' it closed - sigh of relief! :-)

I need now attach the fourth MDF panel with the seal stapled on but I have already holes drilled in both for the aligning pins. Then attach the latch and the final door layer (plasterboard). 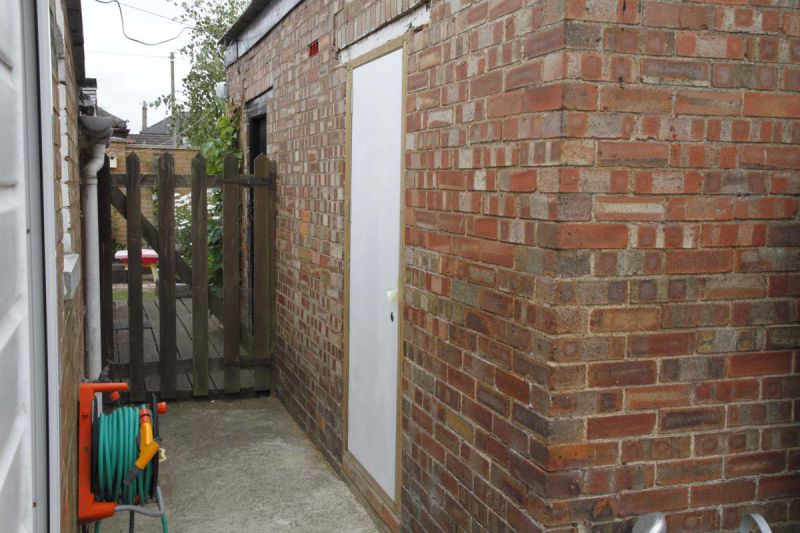 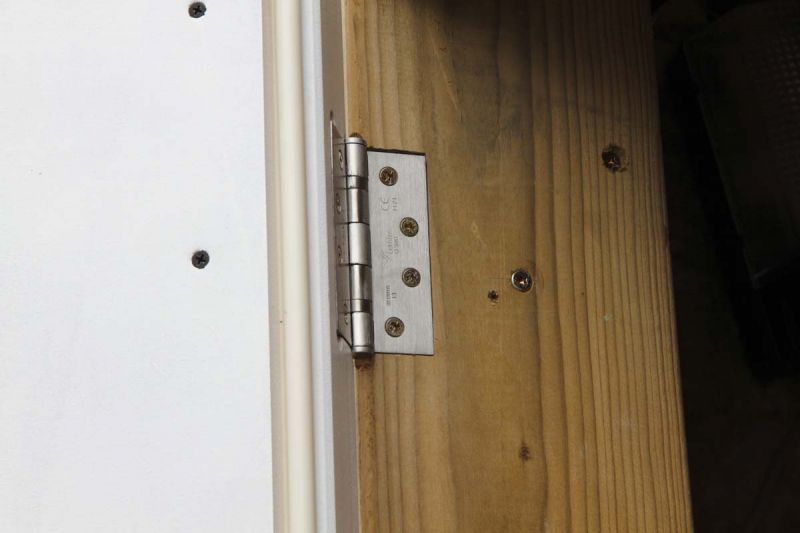 I was hoping to finally get the outer door hung this weekend but there were still a number of things to do. Firstly, the door and seal panel would need painting. I had bought a tin of Sadolin satin white (exterior paint) which I had used to coat some timber cladding on the house and found it to be extremely easy to use. Of course the main issue with painting is the time in between coats which makes the job a lot longer although with the current warm weather this is not too bad.  I initially put down a couple of light diluted coats (Sadolin is water based so this is possible) which were very quick to dry so I could easily do on Saturday during the day which left a dry surface to paint one undiluted coat last thing at night.  This coat would be ready for over painting at midday on Sunday and I could start thinking about fitting the lock.

During periods while the paint was drying I did manage to do some other jobs, including a thorough clean up of the workshop - my obsession at times. I also made a jig for the hinge positions from the door and transferred this to the door frame and routed the corresponding rebates ready for the door to be hung.

Obviously as this door is open to the outside it needs to be totally secure and I had bought a 3" 5-lever mortice dead lock from Screwfix on Friday as a first level of security.  Once the last coat of paint was dry enough to work on I set about installing the lock, which involves making an 18mm x 84mm deep pocket in the edge of the door to accommodate the lock mechanism. With a few holes drilled and a bit of work with the chisels...done. Next, the recess for the lock outer plate to allow it to sit flush with the surface. I used the router here to cut an accurate recess at exactly 5mm deep and squared the corners with a chisel. All good, and once screwed into position all that remained was to make the slot for the key to enter (from the outside only.)

Unfortunately I was running out of time on Sunday so hanging the door would have to wait for another day :-( All that was left to do was have a final clear up, although I did manage to get the four hinges screwed onto the door ready for hanging. Just have to hope that all of my measuring for the hinges on the frame is accurate when I come to fix the door ;-)

Photo (image from later stage but shows the lock): 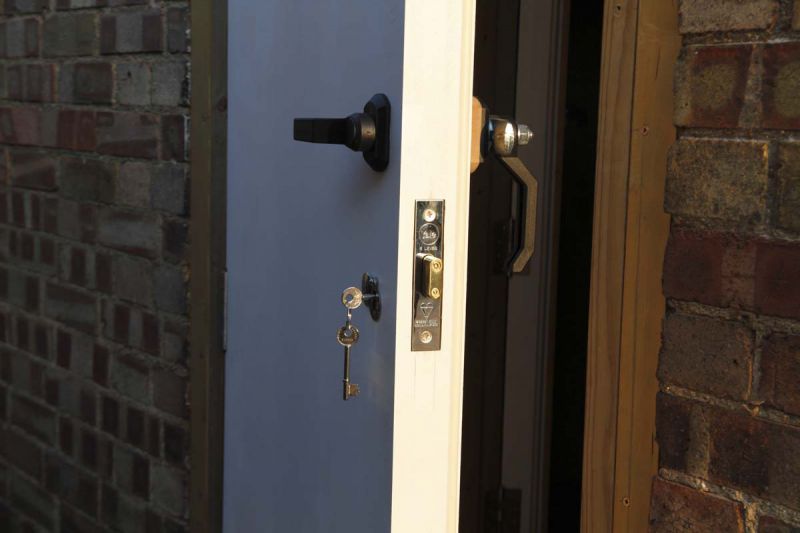 A few things happening this weekend so limited time available - Wimbledon final on Sunday and watched Murray finally get his deserved Wimbledon - title great work Andy! It was also a scorching couple of days so BBQ and picnic with the family :-)

Anyway, I did also get some build time in and I particularly wanted get the last MDF panel cut and machined for the outer door. As with the first door, this panel attaches once the door is in on the frame and has the 'P' section silicone seal attached before securing to the main door assembly.  This panel is about 20mm all round under the size of the door itself.

Cutting the panel went ok but the blade on my circular saw is getting pretty blunt especially with the amount of MDF I have had to cut. It is really starting to struggle and over a long distance starts to overheat. I did have to plane the long edge a bit  as it managed to deflect the guide timber a small amount cutting a mm or so narrower than I planned. Not an issue as we are not talking very tight tolerances. So note: get new circular saw blade.  At least that's the last of the MDF sheets for now.

Next fairly straight forward job was to machine the 2.5mm deep rebate to allow for the attachment of the seal. The router makes easy work of this and once the stops are set it takes a few minutes to complete all four sides.

All that left to do was to align the panel with the main door assembly and drill two blind pilot holes through to allow for two locating pins to be inserted to make lining the seal panel onto the main door easy. This worked perfectly on door one so applied the same trick here.

I first planed and sanded the edges of the door assembly removing any rough areas making it good for sealing.

It was then a matter of rebating to allow for the four hinges to be attached. Again the router was used here and once set up correctly

As with door 1 I applied three coats of diluted PVA to seal the MDF. I little easier this time as drying time between coats was a lot less than before in the colder temperature. This meant I could easily get two coats on per day.

Having made a bit of an error (well fairly major actually ;-) ) with the first door when gluing, basically ending up with a fair curve along its length which I had to spend a lot of time correcting by jigging the whole thing and bending the other way :-( Needless to say I didn't want to make the same mistake again and chose a much better method when glueing - basically clamping the assembly rather than applying weight to it.

I used a couple of joist lengths which are very straight and clamped it all together against these to ensure a straight door. So once the panels were sanded and cleaned using white spirit I applied the PVA to the meeting surfaces and lined the edges up before clamping tight. I left this over night to dry. 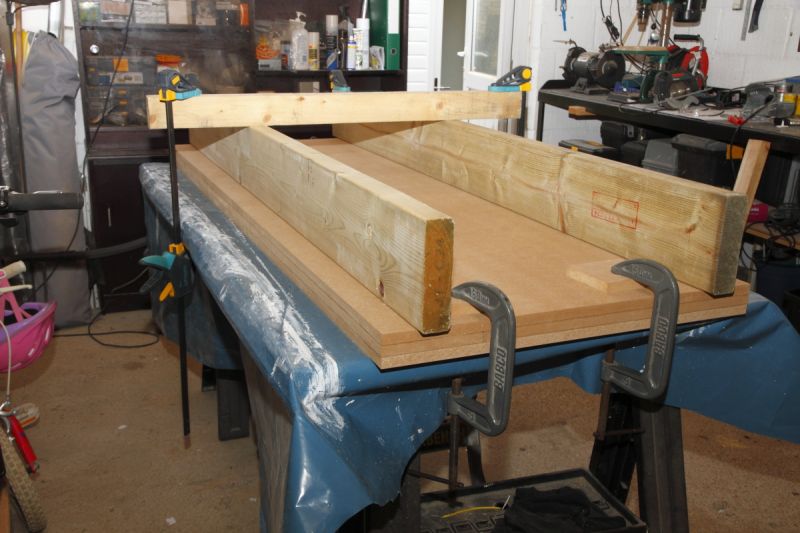